Last September, Jack Shainman’s Kinderhook gallery, known as “The School,” unveiled artist Nick Cave’s “Truth Be Told” to a less than positive reception. Although one might assume the politics of the message might have been the issue since Cave created the artwork in response to the police killing of George Floyd, according to the town officials the backlash had to do with how the art was installed.

The massive, two-story words “Truth Be Told” were painted across The School’s front brick facade. Unfortunately, the town officials claimed the art did not abide by town code signage/proper paint laws. The public rushed to the art and gallery’s defense with a viral petition to save the piece. But, while town officials tussled with the gallery and its growing list of supporters, the Brooklyn Museum came to the rescue. 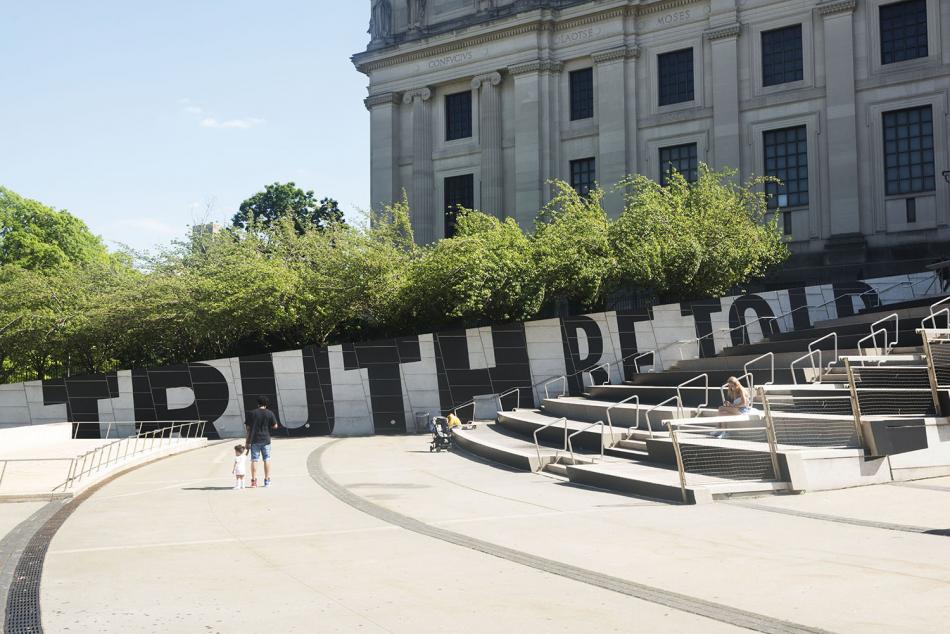 "Truth Be Told" at the Brooklyn Museum

From now until March 20, 2022, Truth Be Told has been reinstalled and somewhat reinvented along the museum’s Plaza on the Eastern Parkway. But this time, the words are slightly warped and partially hidden. The Kinderhook version of this was bold and in your face. This newly reimagined work seems a bit more demure. Perhaps this was an intentional way to make the art (and us) more thoughtful?

Most importantly, the Brooklyn museum states that Nick Cave and designer Bob Faust “question the precarious nature of truth in our society—from governments and institutions to communities and individuals—asking where truth does and does not reside. The site-specific installation Truth Be Told takes its title from the informal conversational phrase in order to spark questions about “alternative” facts, political delusion, and assaults on objectivity. In effect, it creates both a written provocation and a simple statement on the value of personal and collective truths. The letters stretch across different planes of the Museum’s lower façade, commenting on how words can be warped and distorted by those in power.”

Kudos to the Brooklyn Museum for continuing to tell the truth!