Long-awaited plans to redevelop the Port Authority's 72-year-old Midtown Bus Terminal are moving forward, with the announcement that Foster + Partners and A. Epstein and Sons International Inc. will lead the project's design team.

“As we make crucial upgrades to the roads, bridges, and tunnels within our most pivotal transportation corridors, we must ensure that we improve not just the functionality and efficiency of our infrastructure, but the experiences of our commuters,” said New Jersey Governor Phil Murphy in a statement. “The Port Authority’s announcement of an architect advisory team to guide the replacement of the Midtown Bus Terminal comes in response to New Jerseyans and New Yorkers who are rightfully demanding better. Together with our regional partners we are answering that call to ensure that the millions of Americans who utilize our public transportation system finally receive the service they deserve.”

The conceptual plan, unveiled in early 2021, calls for demolishing the existing bus terminal, which would be replaced at its current location with a new facility offering a 40 percent capacity increase for commuter and intercity buses. The new complex would also relocate storing and staging of buses off of street-level lots, and allow current on-street pickup locations to move indoors. Likewise, the ramp linking the terminal to the Lincoln Terminal will be covered by a deck, creating roughly 3.5 acres of new public green space.

In addition to transportation infrastructure, the proposed plan will permit the construction of up to four high-rise buildings on Eighth, Ninth, 10th, and 11th Avenues. 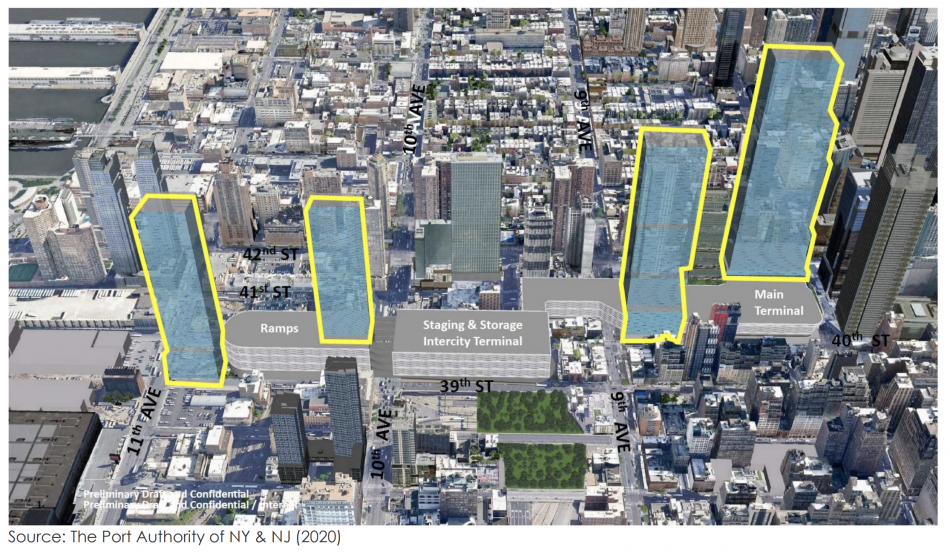 The new terminal, which is expected to accommodate growth in bus traffic through 2050, is expected to complete the Federal environmental review process by Summer 2023. At that point, construction would occur in phases, allowing the existing facility to remain in service while its replacement takes shape. That includes decking over sections of Dyer Avenue early in the process, providing a temporary staging location that would be converted into green space later on.

For more information on the project, including status updates, visit pabtreplacement.com.